(Picture above: Cathay Pacific flight CX610 getting ready for a short hop service from Los Angeles to San Francisco)

The A330-200 is the newest member of Airbus' widebody twinjet family and is a long range, shortened development of the standard A330, developed in part as a replacement for the A300-600R and a competitor to the 767-300ER.

Because of its decreased length the A330-200 features enlarged horizontal and vertical tail surfaces (to compensate for the loss of moment arm with the shorter fuselage). Another important change is the addition of a centre fuel tank, which increases the A330-200's fuel capacity over the 300's, and results in the 200's 11,850km (6400nm) range.

The A330-200 has sold quite strongly since its launch. Among the initial A330-200 customers are, apart from ILFC, Canada 3000, Korean Air, Austrian, Air Transat, Emirates, Swissair, Sabena, Monarch, Asiana, TAM, and Air Lanka.

The download comes in a single .zip file. Within the .zip, you will find 2 different addons: the a330 and a plugin called Ground Handling Solutions (GHS) also by JARDesign. The version that comes with the a330 is locked specifically to the a330. There is a standalone version that works with every single aircraft, provided configuration files are present. I have purchased the full unlocked version of GHS, so that is the version you’ll see in this review. However, the locked version works exactly the same way.

The modelling is superb in the a330. Every little bit of detail, including door handles, and the gear controls have been modelled with precision.

Here's a couple of screenshots of LAX ground crew busy preparing this widebody airliner for a short haul service to San Francisco.

Ground Operations is a separate plugin that ships with the a330 and this particular version is locked so it works with only the a330. Disclaimer: I am using the full unlocked version, but both versions with the a330 is IDENTICAL - I've already tested it before reinstalling the full version.

The Ground Operations plugin is described in detail a bit further into this review.

For this flight, we will be taking Cathay Pacific flight CX610 on a very short hop from Los Angeles to San Francisco.

Here we are at the air bridge, just about to get on board.

Ok first things first, let’s do a safety inspection check in the cabin. Here, you can see JARDesign has beautifully modelled the 2 class cabin, with Premium and Economy class. Safety inspection, check! Let’s head into the cockpit.

Luckily, the inbound crew left the aircraft in a turnaround state, so we we can dive right into setting up the on board computers.

First up, verify that we are indeed running cycle 1601 – the latest for January 2016. Here’s the INIT page after setup. Our route takes us from KLAX to KSFO, cruising at 32000 ft, and our flight number is CX610.

If you own the JAR a320, you'll find that the MCDU works as the a320's; I haven't seen any new buttons/pages. There are of course a lot of new features I haven't seen from the a320 - one example is when you insert a SID and the computer now asks you to insert it as a temporary flight plan and then confirm it - much like Boeing's "execute" button. I would assume that this feature is now in the a320 as well, though I can't confirm because I haven't installed it since I moved over to my new custom PC build.

Here’s the departure we’re flying out of LAX: the FIXIT2 departure.

And the F-PLAN page all filled out and ready to go.

Here's one item that I found to be a bug, or in fact realistic and I've been mis-led by other inaccurate Airbus addons in the past: the FCU only allows you to select either airports, VOR, or constraints – unlike the Boeings, you can’t have all on at once. Again, I'm not sure if this is a bug, or is accurate, but I've just been mis-led by other addons. However, it doesn’t affect my flight at all because I only stick airports on anyways.

Here’s the entire flight plan & waypoints in a zoomed out view on the ND. Looking good!

And the cockpit looks good as well; all preflight checks and duties complete, just have to wait for boarding to complete and we can pushback & start our engines.

Now’s a good chance for me to show you the Ground Handling from JARDesign. Here, you have the menu – from the plugins dropdown. Drive Up All will drive every single truck / bus / van to the aircraft in sequence as per the configuration; this includes catering, luggage loaders, passenger bus, crew van… etc. The Drive Away All will drive the vehicles away in sequence after configuration. If you’re in a hurry to make it out of the gate, select Hide All and everything will disappear instantly.

If you wish to only have select vehicles drive up to and service the aircraft, you can select the Control Panel option. This option allows you to control the vehicles you want to drive up to the aircraft and which to drive away. Similarly, you can also select one to hide and it disappears instantly.

Note that the service vehicles will automatically open & close your aircraft doors. You do not have to touch the door menu – very realistic, as it’s the cabin crew + ground crew doing all the opening/closing of the doors. Pilots just monitor through the ECAM page.

The new Beta version contains an additional feature: liveries. Now you can select (and I think even make your own) liveries for the ground service vehicles. For example, here at my home airport of CYVR, we have the Gate Gourmet liveries for catering trucks. In LAX you'd get a bunch like Sky Chefs. You can choose all of those liveries in the new menu in the Beta.

The last of the passengers have now boarded and we are ready for pushback. The aircraft comes with a pushback service. And as always, it’s steerable pushback, so you control the direction – push/pull and left/right.

Here's the pushback mid-range truck powerfully lifting up the nosewheel of the aircraft so pushback can begin.

To stop the pushback, just deselect the arrows and when the shield has no arrows indicated, select disconnect in the plugins menu and the truck will lower the nosewheel and disconnect from the aircraft.

The a330 handles very well on the ground. Like all aircraft in X-Plane, the heavier I load it, the heavier it feels. Vice versa for lighter loads. In this case, we're carrying almost full passengers for this busy ferry flight at the end of the holidays for some people, so the flight is packed.

Here’s a few quick shots of our aircraft blasting out of a cloudy Los Angeles.

If you get a moment to hand fly this aircraft, I strongly recommend doing so; you will be blown back by how well the aircraft listens to your inputs, big and small.

Autothrottle also works perfectly; Takeoff was in the FLEX position, then to the CLB (climb thrust) dent and it stays there all the way until landing, when the throttles are pulled back. The CLB dent is pretty much the autothrottle.

At the top of descend, the MCP altitude is pushed and the aircraft descends according to the vertical navigation path.

There are, at times, when the aircraft does a sudden nose-dive, and at times when the aircraft suddenly levels off without anything in the way (eg. Flaps being deployed, not enough drag… etc.). However, a switch into manual descend will solve this.

Here’s a few shots of the aircraft descending into KSFO.

As I mentioned earlier, it is an absolute joy to hand fly this aircraft. I disconnected shortly after glide slope was captured and flew the approach onto runway 28R. The aircraft behaves perfectly to small sidestick movement. As my left hand does small corrections to pitch and bank with my sidestick (yes I actually fly Airbus with my left hand on the joystick), the fly-by-wire system reacts with precision as I make these corrections.

I leave you with a couple of screenshots of the aircraft landing, taxiing to the gate, and shutdown.

And here's CX610 on the taxiway at San Francisco.

JARDesign has really perfected this a330. The cockpit textures and modeling are amazing and the systems needed to fly a normal operating procedure leg are all fully modeled.

Some (but not limited to) of what I liked:

What I thought could be improved:

I should point out though - while these missing features could have added more immersion to the a330, there are many countless features that make up for these lost ones and I still think this aircraft is fantastic

The JARDesign a330-200 is a fantastic aircraft in so many different aspects - modelling, graphics, systems, attention to detail... etc.
Though there were a few hiccups that I personally found could be improved, I'd like to present JARDesign with a SimReview.ca GOLD Award: and a rating of 4.5/5. 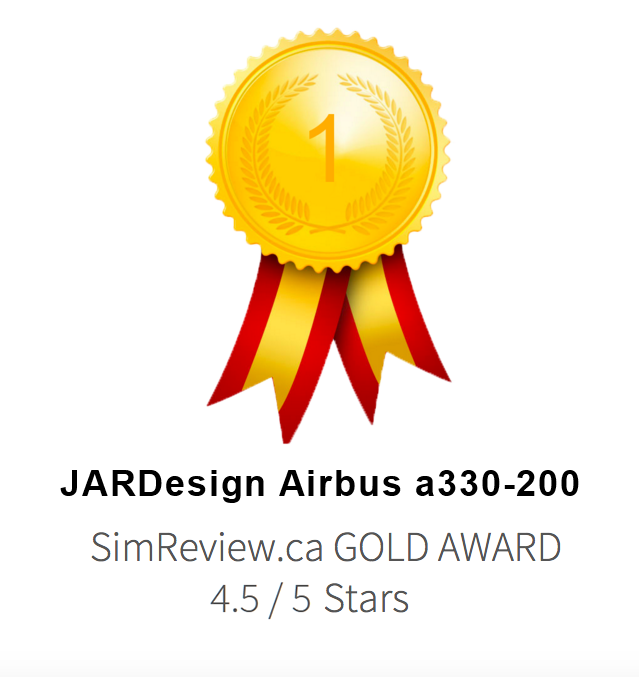